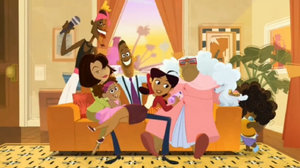 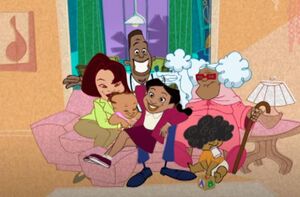 The intro begins with the family's and Puff's colored stills, Penny Proud is talking on her phone, Kyla Pratt is credited, CeCe steals her phone, Penny Proud tried to grab CeCe to get her phone back, Tommy Davidson is credited, she grabs her and CeCe throws her phone to BeBe, JoMarie Payton is credited, Penny Proud get a determined face then chases after BeBe to retrieve her phone, BeBe hides behind Trudy, Trudy has Penny's phone, Penny's Bae is calling, Penny swipes the phone from Trudy, Penny runs to the door as Oscar is doing an experiment, it explodes in his face, Penny comes in and takes a selfie, she waves goodbye and closes the door, Penny and her friends are taking a selfie, the Gross Sisters have their hands out demanding money, Penny's friends run away, Penny catches her phone and also proceeds to run, Oscar is talking to BeBe and CeCe, Penny is seen out the window running home, Oscar opens the door for her, he snatches her phone, Penny's friends (without Sticky) try to enter, he closes the door and pops out with (insert minor character here), Suga Mama and Puff opens in, Oscar slams the door in panic, but Suga Mama slams it open crushing Oscar and grabs Penny's phone, she throws Penny's phone to her and sits down on the couch, Oscar runs behind the couch pointing to the camera, everyone positions themselves for the pictures, Shifting into a picture, CeCe and Puff both bites Oscar's ear and BeBe tries to pull Puff off. Bruce W. Smith is credited.

The intro begins with Puff's and family's colored stills, Penny Proud is talking on her phone, BeBe and CeCe pulled her hair, the twins crawled while Penny Proud walking and seeking Trudy holding CeCe, feeling underwhelmed, still seeking in hallways, BeBe squirted strawberry milk and Penny Proud's hair became wet. Oscar hungers chicken and waffles (never in the revival, due to racial themes), Penny Proud drinks milk in breakfast before she leaves with her friends and closes the door, the series' logo (with photos in the revival) and zooms out into the father's camera, the family is in the couch while taking a picture, the father opens the door and seeing Penny Proud rushing with a paper and her friends smiled, closing and pops out with (insert minor character here), Suga Mama and Puff opens in, Still, the family is in the couch before taking a picture, Shifting into a picture, Puff bites Oscar's ear. The series' logo appears. Bruce W. Smith is credited and the voice actors were never billed.

Destiny's Child and Solange: The Proud Family, what?

You and me will always be tight

Family every single day and night

You know I'm loving every single thing you do

I know that I can always be myself

Around you more than anybody else

Everyday as I'm heading off to school

You know there's no one I love as much as you

It's a family thing

A family, a family

Joyce Wrice: The Proud Family, what?

You and me will always be tight

Family every day and every night

You know that I'm loving every single thing you do

I know that I can always be myself

I'm lovin' you more than anybody else

Every single day when i'm heading off to school

You know there's no one I love as much as you

They'll make you scream and make you wanna sing

A family, a family 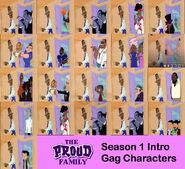 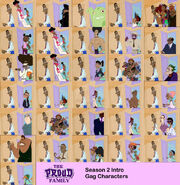