The Proud Family Wiki
Register
Don't have an account?
Sign In
Advertisement
in: Unsourced quotes, Characters, Females,
and 12 more

Penelope Marie "Penny" Proud is the lead protagonist of Disney's animated television series, The Proud Family. She is a 14 year old girl who lives in Wizardville, California with her mother, father, brother and sister. Her grandmother visits everyday and often spends the night with her pet poodle. She is a typical teenager who tries to live the life she dreams of, but her parents (particularly her father) does not allow her from dating boys. Penny loves her family dearly, but often finds herself embarrassed by the way her father, Oscar Proud, acts in public, how her mother Dr. Trudy Proud coddles her, and annoyed by the fact that she's often stuck having to babysit the twins Bebe and CeCe, which keeps her from being able to go out with her friends. Suga Mama is very quick to stand up for her grandbaby and she is usually someone Penny goes to whenever she feels her parents are being unreasonable.

Penny is a cute, young and very beautiful teenage girl with black hair that is always in low twin pigtails by two dark pink hair ties with a single hair strand sticking up, a beauty mark under her left eye and brown lips.

Her closet is full of the same exact combination of clothes.

Sometimes while swimming, she often wears a dark red one-piece swimsuit and once weared a black one.

Penelope Marie Proud was born to Gertrude Alicia-Ann Parker and Oscar Jackson Proud on June 4, 1987 in Wizville, California. During this time, her mother; aged 21, was months from graduating college and would go on to earn a doctorate in veterinary medicine. Her father (also 21) had dropped out of school to pursue his dream of becoming an entrepreneur. Her parents married shortly after and then went on to successfully achieve their career goals. In 1992, her family moved to their current address at 1433 Kelly Rd, in Wizville, months before her fifth birthday. Shortly after, she would meet Dijonay Jones, whom she would develop a long lasting friendship with from the age of 4, all the way up through high school. In 1998, she and Jones would start their 6th grade year at Willie T. Ribbs Middle School where they would meet Sticky Webb, a neighborhood kid with a brilliant mind; and girl scout Zoey Howzer, a Jewish-American who was new to the area at the time and desperately looking for a place to fit in. A year later, she would be blessed with a brother, Benjamin Jackson Proud and sister, Celine Nicole Proud; twins better known as BeBe and CeCe. In 2001, upon beginning their final year year at Ribbs Middle School, Penny and friends would welcome LaCienega Boulevardez; a long time friend of Dijonay's that Penny and Zoey previously knew nothing about. Penny and LaCienega would get off on the wrong foot as they were set up to compete for the last spot on the Willie T. Ribbs Racer Cheerleader squad which Dijonay was captain of. Due to unfortunate circumstances, Penny and LaCienega would become enemies from the moment they laid eyes on one another, but then would also become neighbors the same night as the Boulevardez family would move into a historic mansion across the street from the Prouds that had previously stood vacant for decades before being renovated. Seemingly by destiny, the Proud and Boulevardez families would become deeply enmeshed as the mothers and fathers of Penny and LaCienega respectively would instantly become best friends and their grandparents Suga Mama (Tennessee native) and Caesar "Papi" Boulevardez (Non-U.S. citizen) would even start dating with plans to possibly marry in the future, meaning that Penny and LaCienega would become deeply involved in each others' lives as if they were family. As a result, things get really complicated between the two.

Despite being blessed with beauty, Penny is a grounded individual and is confident in who she is, while also being courteous to her parents and peers most of the time. She is an extrovert, having excellent communication skills and a knack for finding ways to relate to almost everyone she talks to. She enjoys shopping and hanging around with her friends, even though they haven't always been faithful to her. Despite this, Penny is extremely forgiving and understanding and does her best to try and see good in people. She is mature and thinks very logically for a girl her age, usually seeing things for what they really are.

Penny respects her parents and usually listens to them, but she often caves in to peer pressure. She can be a bit obstinate, and it leads her into undesirable situations from time to time; a trait inherited from her father, who once told her to always stand up for what she believes in. Ironically, Penny is often distressed with her father who adopts an authoritarian parenting style which clashes with Penny's strong willed personality. He is especially strict whenever it comes to Penny associating with boys which opens up a lot of opportunities for a teenage girl like her to get into trouble. She happens to be closer to her mom who adopts a democratic parenting style and seems to respect Penny's feelings more by allowing her to have a voice.

She is also a natural born leader and tends to act as such in her friend group much of the time. She gives inspirational speeches that often get the people around her engaged and willing to help support her beliefs and causes. She proved herself to be a talented singer as a member of LPDZ and her talents eventually land her a brief career as a solo singer and actress for Wizard Kelly Studios under the name Penné until she quits after falling out of character and then missing her old lifestyle.

Penny is extremely productive at school as she gets straight A's, plays on the football team and writes for the school newspaper, 'The Checkerboard Times'. She has also held a school-office for four consecutive years. Penny tried out for cheer leading, but she sacrificed her chances by saving her rival, LaCienega Boulevardez from a cruel prank involving the stage being converted into a gigantic CD. Penny got caught in the prank herself while forcing LaCienega offstage causing herself to get seriously injured and by default, LaCienega was given the last spot on the cheerleading squad.

Penny is also prolific at writing and reciting poetry but became resentful when she discovered that Dijonay was even better than her at it. When Penny reached her sweet-sixteen [3] she began demanding independence, but had to deal with her father's issues in allowing her to grow up. She became a hero by saving the world with the help of her friends and makes up with her dad once he finally accepts the fact that Penny is her own person who can make her own choices afterwards.

Penny has made a myriad of friends on the show and even away from the show, but she spends most of her time hanging out with Dijonay Jones, LaCienega Boulevardez, Zoey Howzer and sometimes Sticky Webb, each of whom she is very loyal to.

Dijonay is considered to be Penny’s best friend as the two have known each other since they were very little. However, her friendship is extremely questionable as she has proven time and time again that she is untrustworthy. She takes much pleasure in ditching Penny whenever she is in a difficult situation and encourages her other friends to do the same. She is also notorious for taking advantage of her and has even back-stabbed her numerous times. In “Adventures in BeBe Sitting” Penny decides she can no longer trust Dijonay after she leaves her behind with her nine wild brothers and sisters while she sneaks to the 3rd Storee Concert where she would go on to lie to Zoey and LaCienega and tell them that Penny said she could go on ahead, bringing them (and the Chang Triplets) bad karma. However, Dijonay has shown at times that she does indeed care about Penny. In "Poetic Justice", she discovered that she was even more talented at reciting poetry than Penny which made her extremely jealous and almost ruined their friendship for good. She then recited a poem dedicated to Penny that she thought of on the spot, thus saving their friendship.

Zoey is perhaps Penny’s most reliable friend as she is often the first to come to Penny’s aid whenever she needs help. Zoey usually gives everything she’s got to support Penny as seen in “Election”. She’ll even stick up for Penny whenever Dijonay or LaCienega are mean to her and often acts as a peacekeeper. However, since Zoey has a tendency to be a follower, she will ditch Penny at times just to fit in with the rest of the group. She’ll also tell people whatever they want to hear which often annoys Penny because it doesn’t always come off as genuine. However, Zoey also serves as a whistleblower and points out whenever Penny is making a mistake which often helps Penny to make better decisions and be a better friend herself. With Zoey being insecure and desperate to fit in, she often makes irrational decisions herself and Penny often has to drag her along and talk some sense into her. This is on display in “Hip-Hop Helicopter”, when Penny literally had to drag her out of Gary’s house party when it started to become unsafe for them.

Penny and LaCienega have a love-hate relationship that gets rather complicated as the two get off to an abysmal start when they are set up to compete for the last spot on the cheer team and LaCienega’s demeanor and actions leave a terrible first impression on Penny, setting the tone for everything that comes after. However, Penny discovers that she actually likes LaCienega a bit as she can be a lot of fun to be around and actually satisfies Penny’s innate need for competition. She also learns that a big reason why they clash so much is that she and LaCienega are perhaps the most similar to one another in comparison to everyone else in the group and pretty much want the same things in life. They gradually bond as the series moves forward; becoming almost like sisters. Despite LaCienega’s rudeness, she has perhaps been the most honest with Penny and the two reach the point where they can communicate telepathically through eye contact and body language which shows they understand each other quite well. It hurts Penny to see LaCienega suffer and she is usually quick to help cheer her up as seen in “Love Thy Neighbor”. Hence the episode title, it also helps that they are neighbors and their families are strongly associated with each other.

Sticky is Penny’s best male friend who is usually open to helping Penny at times of need, using his genius mind and wacky technology. He once rescued Penny from The Gross Sisters after Dijonay accepted money from them to track her down. There are subtle clues that Sticky had a bit of a crush on Penny early on and she often bosses him around. It is later revealed that Sticky had strong feelings for Dijonay once she got into a relationship with Duke Anoi and Penny pretended to be Sticky’s girlfriend for a day to try and make Dijonay jealous in order to help him win her back though it initially fails. Sticky seemed to enjoy flashing Penny off during this time while Penny didn’t take it as seriously. 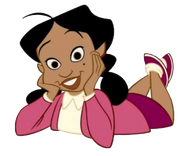 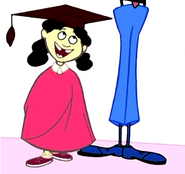