The Proud Family Wiki
Register
Don't have an account?
Sign In
Advertisement
in: Characters, Teens, Males,
and 4 more

When You Wish Upon a Roker

He is a nerd who had a crush on Penny Proud in the first-season episode "Rumors". As a result, LaCienega used him as a pawn to get back at Penny for not inviting her to her party effectively destroying her reputation while boosting his. Strangely enough, he ended up defeating an experienced Penny Proud and the rich and popular Wizard Kelly Jr. in an upset to win the school election for class president.

He returns in the revival with an obsession with the cryptocurrency, "Bitcoin."

He returned in the revival with growed-out hair. 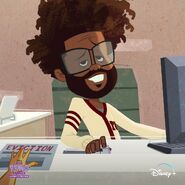 Promotion image of Myron in The Proud Family: Louder and Prouder